The 90s started good, as we bought our first Amiga 1200 – yes, this time the all-in one version and not the Amiga 4000 (at first). This was primarily because we had our Amiga 2000 fully equipped through it’s Zorro II Bus Board: SCSI Controller with 40MB Harddrive, 8 Megabytes of RAM, two Floppy Drives and VillageTronic’s Picasso Graphics Card. But the Amiga 1200 had the new AGA chipset and we needed to check it out asap!

Then the unthinkable happened – after all management mistakes a company could make – Commodore went bankrupt! Check out Dave Haynie‘s Movie for the last days of Commodore.

At the time, this was a huge shock for me, but Amiga never dies and in retrospect I can say: it was greater than ever! I have to quote Wikipedia once again:

The company’s computer systems, especially the C64 and Amiga series, retained a cult following decades after its demise.

This also counts for all the other platforms I got to know back then, from the Atari ST, Sinclair Spectrum (I call it “Türstopper” – doorstop) to the Acorn Archimedes – the first RISC based home computer with it’s own ARM architecture (StrongARM to me is the best name for a processor ever ROFL) – which most smartphones today are running on. Shout outs to the only two people I know that really created on this machine – you know who you are!

Nevertheless the Amiga had the largest fanbase of enthusiasts – and this created a huge aftermarket with accelerator boards, graphics cards and just about every expansion equipment you can think of.

And because of that I can proudly say that despite Commodores crash, during all of the 1990s I have used the Amiga – and only the Amiga going forward until the millennium. Of course we still played all the games, most notably the epic Pinball Fantasies and Mortal Kombat. But I also started writing my job applications on it and in later years connected it to the internet (remember surfing with iBrowse).

I still have my modems, first the Discovery 1200 baud, which was followed by the Supra FAXModem 14.400 – what a lovely piece of hardware with it’s 2-digit display it was! Before the internet there were BBSes – and the most interesting ones weren’t accessible for everybody. But since I had some good friends that were avid Phone Phreakers and well connected within the scene – I could at least get into some of them (then trying to get past the 1:3 MB Up-/Download Ratio LOL), AmiExpress and 5-node ringdown with USRobotics Courier HST come to mind. And yeah, without further comment, I also remember Kimble from around that time (not personally, but he already made the news).

Rebuilding the Amiga 1200 into a tower 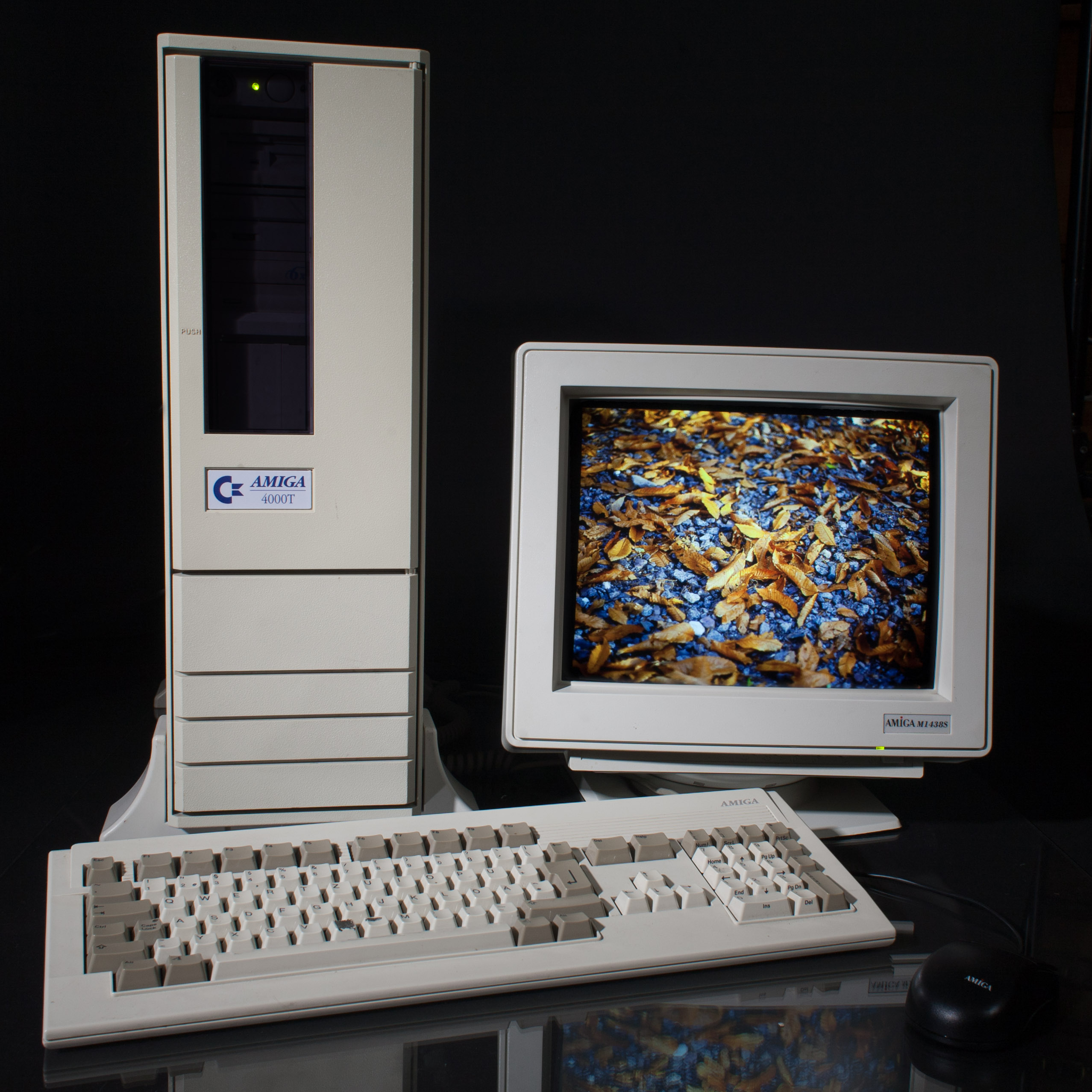 After all the hassle I rewarded myself with an A4000T.

In the mid 90s the day came to make a switch to the last generation of the Amiga and since we already had an A1200 – why not just build it into a tower with a bus-board for expansion? So I got my first Infinitv Tower from a company called Micronik – together with the Blizzard 1260 (50MHz 68060, hell yeah!) and the CyberVision 64 GFX Card from the legends at phase5 – this card was originally for the A4000 but as I found out here it all depends on the right slot.

When assembling a computer, usually you put it all together and then pray it will boot – but naturally it won’t. Then you take it apart and re-assemble it the same way again – and all of a sudden it works. At least this was my experience with the Infinitv Tower and it seemed to me, that my model was some kind of prototype. I know these kits got better, but I had so many interesting problems with mine that it led to an epic road trip to the city of Leverkusen over a year later to return it and receive a full refund (!) – talking about customer care!

So, yeah, I had my fair share of fooling around with hardware and quickly went on to get the Amiga 4000 with all the expansions. And unlike the picture – I used it with my Nokia Monitor, what? Yes, they made monitors, too.

This leads to another exciting thing about computing in the 90s and of course the Amiga – where to get the latest hardware, when there is no online retailer?

The Amiga Expo – not your average computer show

Sure, there were lots of shops you could visit or mail-order from – but the highlight of every year came in November with the Amiga Expo in Cologne. My first fair ever was in ’89 and from then on we went every year – and every time it was a truly epic event.

The Amiga Expo was the place to experience and buy all the new hardware, at special prices. But when thousands of freaks from all over the world were coming – it became one giant party and scene meeting. You could hear air-horns being blown (at. a. computer. show.), all the walls had been taped because the crews were tagging and putting stickers on (made on the Amiga, of course).

Imagine this: At the World of Commodore in Frankfurt we sit at a wall and talk to some friends, when suddenly Klark Kent – a world famous graffiti legend whom I got to work with years later – pulls up and spray paints a giant piece onto the hall’s walls (at. a. computer. show.). And no, this wasn’t a show act or something, it was just the way things were back then.

Check this German Blog that illustrates everything very well:

When computer magazines were forums

Yes, tell me I sound like an old man (I’m not!), but even computer magazines were completely different back then. The most influential ones that come to mind were the Amiga Joker and Aktueller Software Markt (ASM) – just take a look at their covers!

They were all hand drawn and these magazines had a very own style of testing new games – every month I couldn’t wait to get the new issue. Recently I sold my first issue of the Amiga Joker – which was given to me in November 1989 by someone I will never forget – for a staggering 150,- Euros (Yes, I was that guy and it is in good hands now!). This is how much people love these magazines! So many many thanks to Manfred Kleinmann, Michael Labiner and their teams!

The other legendary magazine was called Computer Flohmarkt (CF) – basically a printed craig’s list – you would think! To me this was nothing less than the first forum and it went like this: You send your classified ad where you post a question, claim (e.g. Amiga>Atari) or whatever you want to talk about to the magazine and wait for it to get printed. Then someone who sees it and wants to answer does the same. So, with the second issue after your post you get your answer or the flamewars on.

Now of course this was a time when we had the IRC (and hashtag meant #channel) and all the BBSes as explained above – but CF somehow was a different beast! Those were the days. Oh, and we also had Tanja Nolte-Berndel – just google it.

My last Amiga and the transformation

As mentioned above, after my experience with the Infinitiv Tower (it worked somehow, tho), I bought an Amiga 4000. And what a machine it was with a 1GB Quantum Fireball harddrive, the CyberVisionPPC and of course the CyberStormPPC 604e with 233 MHz – a PowerPC expansion card. But sadly it was my last Amiga and would mark my farewell to the platform.

The PowerPC CPU was also used in Apple computers around that time, so more and more of my friends were switching to what seemed as the logical next step. The usage, the look and feel of the OS and everything about the platform was somehow similar and this would lead to my next computer experience a few years later – Apple’s Pismo Notebook which I will cover in Part 3.

Also around that time, at some of my very first jobs, I came in touch with Windows. I never used it before. Ever. I mean I have no problem using it and as of today I have lots of professional experience with it that goes far beyond Excel and the Office Package. At my very first real job at Mannesmann Mobilfunk we switched from the terminal based SAP R/2 to the GUI based SAP R/3 and that made for some experience – oddly it was the first of two occasions so far, where I could see why a terminal sometimes might be faster to work with.

But back to the Amiga, because as said before: Amiga never dies. And so the platform went on to be used by the NASA to keep track of low orbiting satellites and the Kennedy Space Center. It was amazing how far ahead of its time Commodore was. Just think about the CDTV (yes, we had one, too), one of the first multimedia platforms designed for the living room. In 1991. I know as a product it was a complete failure, but looking back, in my opinion, Commodore could have been what Apple is today!

With retro computing being alive and well – just look at this Kickstarter – and with people like Jens Schönfeld and all the enthusiasts, the C64, Amiga and all other platforms will live on.

So, let’s go to part 3 of my history in computing.